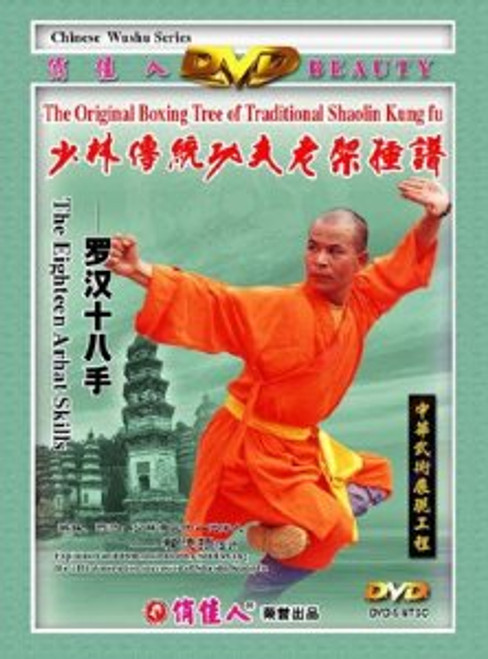 The Eighteen Arhat Skills : The Eighteen Arhat Skills is one of the first elementary boxing series in Shaolin Kung fu. According to the Shaolin boxing manual: in the dynastic of Sui, the kung fu monks had selected and edited a simple series of boxing that didn't have too much exercise. It was for the Buddhist monks who sit in meditation facing the wall for long time. At first, they selected one movement respectively from the eighteen Buddhist arhats bronze statues, and it was called The Eighteen Arhat Skills. Later, it was developed into a complete wushu routine, and it was also called The Eighteen Arhat Skills. It mostly consisted of postures of retreating, turning, dodging, shrinking and so on to avoid the attacking of the opponent. The postures can be used skillfully to attack the enemy's upper part and defend his own lower part, attack the enemy's left part and defend his right part. You can also use both attacking and defending postures, false and true postures. You can achieve such aims: When you are attacking, you won't expose your shortcomings; when you are defending, you can find a chance to attack; when you face a stronger enemy, you won't be beaten; when you face a weaker enemy, you are sure to win. At the same time, pay attention to the coordination of the leg, elbow and the body. Pay special attention to the eyesight. Be sure that in every movement, the eyesight goes with the hands and the eyesight goes as one movement begins. Use your eye to decide which posture to practise before you start a move, and use your eye to settle the strategy after you have come out a posture. These are the clever ways of practicing the Eighteen Arhat Skills.

The Emperor Prays to Heaven - (WE1J)