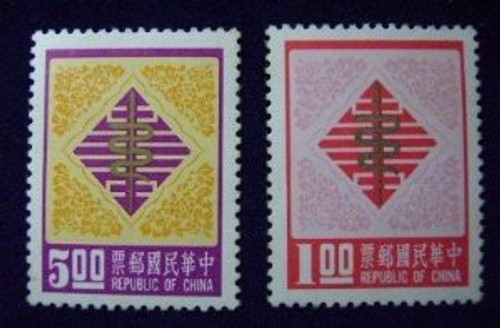 Taiwan Stamps : 1976, Taiwan stamps TW S126 Scott 2028-9 New Year's Greeting, MNH-VF : 1977 is the Year of the Snake, a brazen staff with a serpent coiled around it-the emblem of medicine, was adopted as the motif of this set of stamps. According to Roman mythology, Aesculapius, the son of Apollo-the God of Light-was a great physician. He was able to heal all manner of maladies. Even those who were sick to death were delivered from their agony. Consequently, he was honored as the God of Medicine. It is said that serpents, the sacred servants of Aesculapius, had a part in each cure. His clublike staff with a serpent coiled around it was regarded as a sign of kindness to save people by practicing medicine. In addition, there is the Biblical story of the Brazen Serpent made by Moses to save the Israelites. Thus, in western tradition the coiled serpent become the symbol of the art of healing-kindness, goodness, and health.