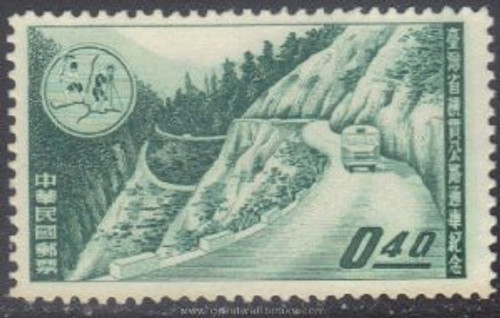 Taiwan Stamps : 1960, TW C65 Scott 1254 Cross Island Highway - MNH, F-VF : The East-West Cross Island Highway in Taiwan was formally inaugurated and the the whole line opened to traffic on May 9, 1960. The route crosses the mountainous area in the central part of the Island. Much of the construction work, where mechanical equipment could not be fully utilized, was accomplished through the hard-labor of ex-servicemen using their bare hands. The opening of this highway did not merely open a direct traffic route between the eastern and the western parts of Taiwan, but greatly helped the development of rich natural resources in the interior, which brightened the prospects of the national economy.In commemoration of this significant construction project and its invaluable contribution to this country, a set of commemorative stamps was issued. The stamps, with two different designs depicting the scenic spots along the highway, are of two rectangular types, horizontal and vertical. On the same day, the souvenir sheet (145 ?? 104 mm.) consisting of 1.00 and 3.00 stamps was issued simultaneously. In the background is a colored scene of the highway. The stamps were printed in intaglio with the background in multicolored typography.