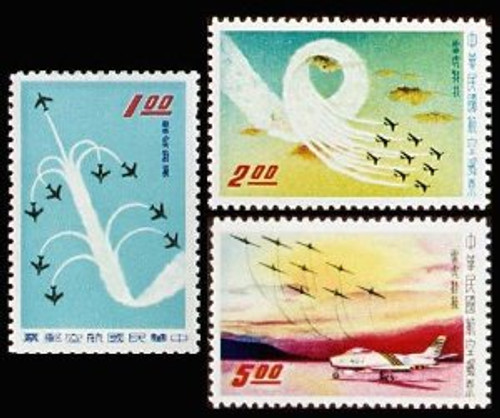 Taiwan Stamps : 1960, Taiwan Stamps TW A15 Scott C70-2 "Thunder Tiger" Aerobatic Team, 1960, MNH, F-VF (Free Shipping by Great Wall Bookstore) : The "Thunder Tiger" aerobatic team of the Chinese Air Force since 1954 has repeatedly given flying exhibitions on various occasions at home and abroad. Their inspiring performances of highly trained precision flying showing their flying skill, great valor, and close teamwork have deeply impressed their spectators. In April 1959 the team was invited to give an aerial show before the first World Congress of Flying in the U.S.A. The various spectacular flying formations of the nine saber jets won the unanimous admiration and praise as one of the most skillful teams ever to perform. In honor of the Chinese Air Force, and to mark the outstanding achievements of the "Thunder Tiger" aerobatic team, a set of air mail postage stamps was issued of three different designs featuring performances of the team.