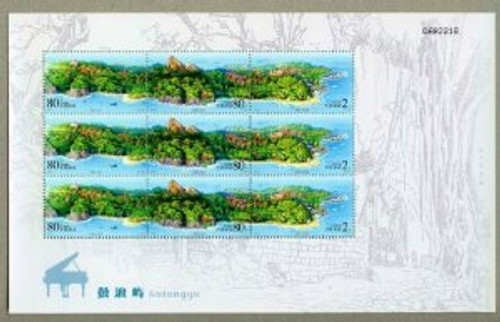 China Stamps - 2003-8, Scott 3274 Gulangyu Island - Mini Sheet of 3 - MNH, F-VF : The Gulangyu Island, covering an area of 1.8 square km, is located off the west seashore of Xiamen, Fujian Province. Because of the sea caves on the island, which give sounds like drums when waved rise, the island got its name Gulang (drum waves). It has undulating hills abundant with historical sites surrounded by evergreen trees. The Sunlight Rock on top of the Dragon Head is the highest point of the island and the symbol of Xiamen. With about a thousand buildings in both Chinese and foreign styles, the island is reputed as "World-Architecture Fair". It is also called the "Island of Piano" because the residents are fond of music, and the percentage of households possessing pianos tops the country. One would be enchanted by the melodious piano music, gentle sea breeze and beautiful weather , and forget to return.