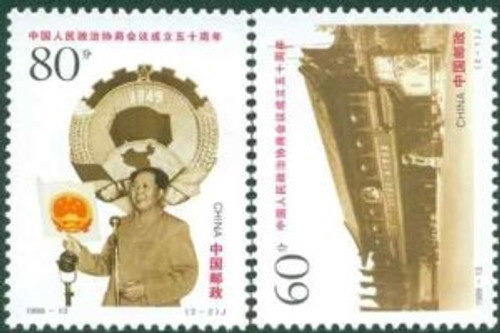 China Stamps - 1999-13 , Scott 2974-75 The 50th Anniversary of the Establishment of CPPCC, MNH, VF : The CPPCC is an organization of patriotic united front of the Chinese people and an important institute for multi-party cooperation and political consultation under the leadership of the Chinese Communist Party. It has a national committee and local committees. Its main functions are political consultation, democratic supervision and organizing all parties, groups and people from all walks of life to participate in and discuss government affairs. The CPPCC was established at the eve of the founding of New China in 1949 and held its first conference on September 21, 1949. In the past 50 years, the CPPCC has played an important irreplaceable role in political life, in the maintenance of unification of the motherland, strengthening the unity of all nationalities and modernization of the country.