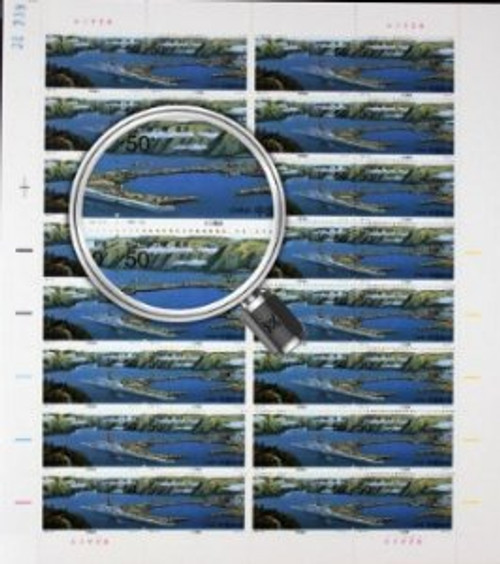 China Stamps - 1997-23 , Scott 2810-11 Blocking River in the Three Gorges Project - Full sheet of 16 complete sets - MNH, VF dealer stock : The Three Gorges, consisting of the Qutang Gorge, the Wu Gorge and the Xiling Gorge, is China's most Famous gorges and scenic attraction. And these gorges are characterized by their length and narrowness of the gorges, cliff hills, tumultuous current, high waves, weird peaks and strange caves. In order to improve its capability in flood prevention at the middle and lower reaches of the Yangtze River and to fully tap the hydro-power resources of the Three Gorges of the Yangtze River, the Fifth Session of the Seventh National People's Congress endorsed the construction of the Three Gorges Water Hub Project, and the construction started on December 14, 1994.The Three Gorges Water Hub Project is a super-large project with huge capability in flood prevention, electricity generation, navigation and water supply. It will be located at Sandouping near Yichang City of Hubei Province, at the middle section of the Xiling Gorge. The project consists of the dike, water diversion channels, workshops for power generators and navigation structures. The unit capacity of generators is planned at 700,000 kilowatts, the total installed capacity is planned at 18.2 million kilowatts, and the annual amount of electricity to be generated is planned at 84.7 billion kilowatt/hours. When this largest hydroelectric station is completed, it will be able to supply huge volumes of electricity to areas such as Central China, East China and Sichuan, and serve as a driving force for the economic prosperity along the Yangtze River. At the same time, it will also improve the navigation conditions of the Yangtze River and 10,000-ton ships will be able to sail directly to Chongqing from Wuhan by then. With careful planning, the places of historical interest and scenic beauty in the Three Gorges area are protected to the maximum, and new tourist attraction sites will develop.