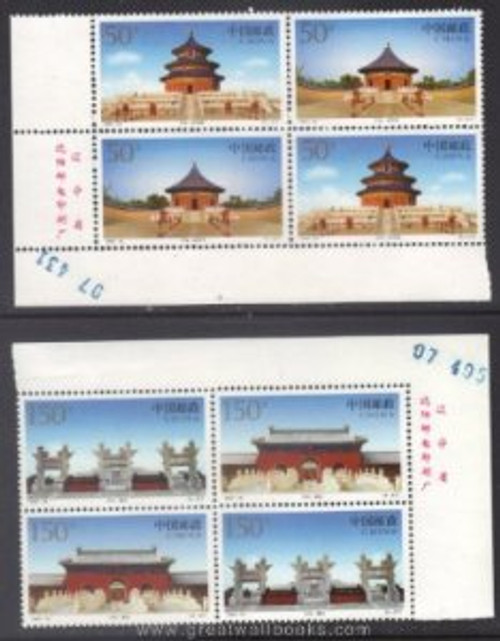 China Stamps - 1997-18 , Scott 2801-4 The Temple of Heaven - Pair w/Imprint + Control Number - MNH, F-VF : The Temple of Heaven, located in the southeastern part of Beijing and built during the reign of Emperor Yongle of Ming Dynasty, is the largest temple-altar structure still kept intact. The Temple of Heaven, also called the Temple of Heaven and Earth, was renamed the Temple of Heaven in 1533, and was the place where emperors of Ming and Qing dynasties worshipped and offered sacrifice to the heaven, and prayed for bumper harvest. Different from the golden tiles and red walls of the Forbidden City, blue is the dominant colour of the Temple of Heaven, symbolizing that all halls and temples were integrated with the sky.The Temple of Heaven has two tiers of walls, forming the inner temple and the outer temple. The walls of the temple take a square shape in the southern sections and a circular shape in the northern sections, symbolizing, that the heaven is round and the earth is square. Its main buildings include two groups, with the Hall of Prayer for Good Harvest, the Gate of Prayer for Good Harvest and the Hall of Imperial Delight as one group, and the Imperial Vault of Heaven and the Altar of Heaven forming the other. The Red Stairway Bridge links up the two. The well-known Echo Wall is the brick-built wall surrounding the Imperial Vault of Heaven and the Three Echo Stone is located right inside the Imperial Vault of Heaven. When one stands at the centre of the Altar of Heaven and speaks to whatever direction, loud and clear echoes can be heard, this interesting phenomenon is regarded as a miracle of the Temple of Heaven. The entire Structure of the Hall of Prayer for Good Harvest is built of wood, gold-gilt and colourfully painted, its design is complicated, elegant and scientific, the structure has a rich cultural connotation and has reached an impeccable level in its design and construction.